The good news about plastic waste

Waste plastics contaminate our food, water and air. Many are calling for a global ban on single-use plastics because throwing them “away” often means into our river systems and then into the world’s oceans.

Take the UK’s single-use plastic bottles: it’s estimated that 35m are used – and discarded – each day, but only 19m are recycled. The 16m bottles that aren’t recycled go to incinerators, landfill or the environment, even though, being PET (polyethylene terephthalate) they are easily reprocessed. Even those bottles that are placed in the recycle stream may be shipped to Asia, in a global market for waste plastics that is itself leaky.

It’s suspected that much of the “recycling” shipped to Asia may be joining local waste in the Great Pacific Garbage Patch. This soupy collection of plastic debris is trapped in place by ocean currents, slowly breaking into ever-smaller pieces, but never breaking down. Covered by bacterial plaques, they are mistaken for food by fish. Ingested, they contaminate the food chain and, potentially, may even be disrupting the biophysical systems that keep our oceans stable, thus contributing to climate change.

So we need to use far less plastic, re-use what we can, and dispose of what we must far more wisely. In facing this challenge, developed countries can learn from innovations in the less-developed world. People, globally, are innovating, creating new processes to use waste plastics and making new objects and art forms.

The Philippines, for example, is the world’s third biggest plastic polluter. Waste material, even from municipal collections, makes its way into the river systems and, from there, out into the open Pacific, contributing to its “plastic soup”. But it’s largely what happens on land that determines the load the oceans must bear.

Industrial recycling isn’t accessible to most people in the Philippines. Even if recycling were available, shipping their waste to China, long the centre of the global plastics recycling industry, is no longer a viable option: the industry is now the target of regulation by the Chinese government, eager to clean up its own environment.

Some waste in the Philippines is reprocessed locally. But people living in remote, rural areas have a stark choice. Either they bury their plastic waste locally, burn it, or come up with innovative solutions to repurpose the material instead. Given the unpalatable nature of the first two options, the country now has an innovative, artisanal plastic craft movement.

Made from single-use plastic juice packs, this traditional Filipino blouse is a work of art - Villia Jefremovas

A few years ago, I worked with craftspeople and artists to put together an exhibition of repurposed plastic waste. The items that really stood out were those things that local people made according to traditional patterns. These were items people used for cultural events that marked their identity as tribal Filipinos. Much of the work of experimentation with the materials was happening in kitchens and workplaces as people shared techniques and tips with each other.

One of our contributing craftspeople, Ikkay, lives in a remote tribal village in Kalinga Province. She makes strands of plastic beads out of bits of waste plastic, using old CD cases and fast food spoons – anything with a bit of gloss. Her beads are replicas of traditional tribal designs. These beads are used in local cultural performances and shipped all over the world for demonstrations of Filipino dance.

Another example of creative re-purposing came from the nearby gold mines. There, mine workers weave the yellow, red and pink plastic wrappers of blasting cap detonators into traditional basket forms. They find the high quality wrappers just as good as the rattan they’d originally used. Burly mineworkers walking the roads with dainty pink-and-yellow plastic backpacks have become a frequent site in and around mining communities.

In both these examples – beads and backpacks – people had figured out innovative ways to re-purpose waste plastic. They took material that would have been garbage and turned it into an item that expressed important cultural values, making something cool, fun, and desirable.

The material itself – waste plastic – has something to do with this. In these Filipino cases, it made tribal displays of beads extra impressive. The makers and wearers of these items were not just subverting ideas about waste, but about social hierarchies and the social power to innovate and set trends. People who admired the plastic craft started to see plastic no longer as just “stuff” on its way to being garbage. Instead, it became imbued with the potential to become something new and different and a way of asserting local ingenuity and identity in a global world.

These examples from the Philippines are not isolated ones. Around the world, there are many small-scale groups doing very similar kinds of projects with re-purposed plastic waste. Rehash Trash in Phnom Penh, Cambodia, makes baskets out of used plastic bags. Ocean Sole in Kenya works with discarded plastic flip-flops to make art. Other initiatives are networks, like that created by Precious Plastic a 3D printing initiative from Amsterdam. They have groups all over the world building 3D printers to create re-purposed plastic items for local markets.

In the UK, people have used fine art to communicate the urgency of the issue to the wider public, whether it’s a giant plastic whale touring the UK or the artist Stuart Haygarth’s collection of plastic waste from UK beaches, hanging in University College Hospital London. But pointing out the problem is only the first step in providing comprehensive solutions. We need to reduce our plastics footprint, seek out items made from recycled materials, and – most importantly – learn, hands on, about new ways to reuse what is now a ubiquitous class of waste materials. 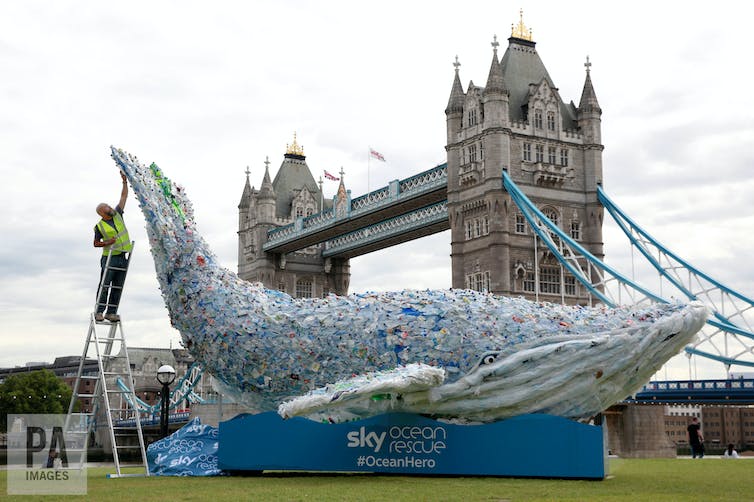 People are meeting the challenges plastic waste poses in creative ways. While the end goal will be to phase out the materials creating the bulk of the pollution, in the meantime we must improve the capture of recycling systems globally and make locally recycled and re-purposed materials more desirable and acceptable. Learning to love plastic – wisely – means taking on the responsibility for our own discarded items.

We could take up the examples of these local innovation workshops and 3D printing groups to get making in communities worldwide. While making new items won’t halt the consumption of plastics altogether, it will divert material from the waste stream while helping people to see its potential. Offering the public a chance to co-create part of the solution should make the inevitable regulatory responses - deposits, disposal taxes and more rigorous waste sorting - more acceptable.

After all, waste plastic is still plastic and amazing stuff – you can make it into pretty much anything you can imagine.